Spreading the message of fitness – The Tribune

by prime one
in Lifestyle
0 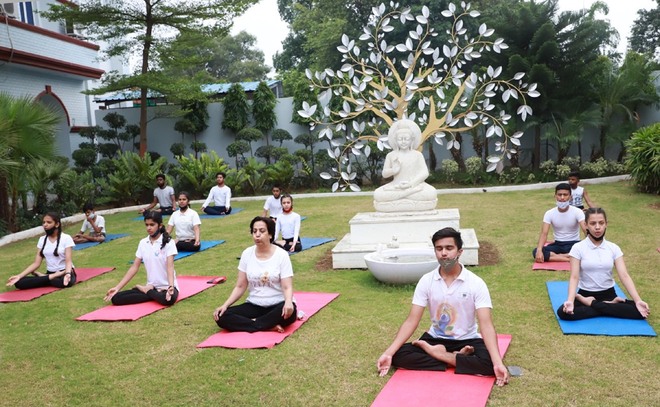 To mark the 7th International Yoga Day and spread across a message of fitness various schools, colleges, social and political leaders and institutions organised yoga sessions and webinars today.

Pushpa Gujral Science City celebrated International Yoga Day by organising a two-day online workshop. Expert Yoga practitioner, Col Sewa Singh, was the resource person at this occasion. The workshop started with warming up and stretching followed by asanas, including a series of padmasanas, sukhasan, tadasana, bhujang asana and ended with Shavasana. Col Singh emphasised on performing asanas regularly for 5 to 10 minutes daily for a happy and stress free life. Dr Neelima Jerath, Director-General Science City, while giving introductory remarks at the occasion said that amidst increasing distractions and stress of modern life, certain research studies have indicated that yoga can be effective in reducing stress and improving mental well-being and general physical improvement. Like all physical exercises, it can help build muscle strength, increase flexibility, boost up endurance and tune up body organs. The fact that it is less strenuous makes it safer and easier for all age groups to practice. Dr Rajesh Grover, Director, Science City, urged the participants to adopt yoga as a routine activity in their daily life.

International Yoga Day was celebrated at GNDU Regional Campus at Ladhewali. The online session was organised by NSS unit of the Department of Laws in association with the Department of Journalism and Mass Communication and the Department of Electronic and Computer Science. Sanjay Kundra, head, Department of Physical Education, MGN Public School, Adarsh Nagar, was the resource person. He spoke about the importance and significance of yoga for human health and for society. He explained and gave live demonstration of various asanas along with his children. Dr Roopam Jagota, Head, Department of Laws, welcomed the guests and highlighted yoga as a way of life and explained its significance in bringing about harmony between body and mind for spiritual discipline. Dr Komal K Mehta was the moderator for the session. He emphasised that yoga is a valuable gift of ancient Indian traditions and has changed our lifestyle.

Eklavya School observed a virtual Yoga Day. The celebration started with an online class of yoga in which all the staff members, students along with their parents participated energetically. After that an online speech was presented by educator Shilpa Kapoor in which she explained the importance of practicing yoga daily and also explained the theme for International Yoga Day is “Yoga at Home and Yoga with Family.” This is followed by online debate competition by the students of senior and middle school. Parents of primary and pre-primary school participated for online yoga practice with their kids, they all appreciated school authorities and staff for taken out such kind of online practices. Students also showed their talent in online poster making completion in which they made different postures of yoga practicing.

Under the guidance of Principal Dr Kiranjeet Randhawa, International Yoga Day was celebrated at MLU DAV College, Phagwara, with great zeal. A webinar was organised for teachers and students. They demonstrated various asanas followed by omkar chanting, warm up exercises were taken up and the participants performed sitting and standing asanas, importance of these were explained simultaneously. Dr Randhawa encouraged students to practice regular yoga to remain fit and improve concentration. Yoga is an old discipline from India. It is both spiritual and physical. Yoga uses breathing techniques, exercise and meditation. It helps to improve health and happiness. Dr Randhawa further explained that yoga helps us to reduce stress, promote relaxation and some medical conditions. A growing trend of people around the world embracing Yoga to stay healthy and rejuvenated and to fight social isolation and depression has been witnessed during the pandemic.

On the concluding day of the Healthy Body Healthy Lifestyle Week being organised in Apeejay College of Fine Arts from June 15 to 21 to mark the International Yoga Day, a yoga workshop was organised in which Kriti Gupta a certified yoga teacher, Ministry of Ayush, Government of India, engaged the teachers in yoga exercises to improve their overall well being. The teachers practiced with the yoga instructor and learned important breathing exercises and other exercises to improve their flexibility and strength. The Principal said yoga was a form which is suitable for all age groups and exercise should be done with regularity to reap the long term benefits. She said the healthy lifestyle week has helped the teachers and made them conscious of the need to work towards their physical fitness.

International Yoga Day was celebrated with great enthusiasm at all five branches of Innocent Hearts Schools and Innocent Hearts College of Education. Teachers, parents and students showed their full enthusiasm in the one-hour session on the occasion of Yoga Day. On this occasion, the yoga session was conducted by Sonia Aron and Meena Gupta. Both are certified yoga trainers from the Ministry of AYUSH and Sri Sri School of Yoga. Sharmila Nakra, Cultural Head, Innocent Hearts Group of Institutions and Holistic Healer, welcomed the yoga instructors. Sonia Aron explained the spiritual, mental and physical benefits of yoga and mentioned that yoga is an essential part of life. Meena Gupta performed exercises, pranayama and many more yogasanas and trained the participants also. The session ended with meditation with the sound of ‘Om’. Sharmila Nakra thanked everyone and shared a message that doing Pranayama and Yoga not only keep us physically strong but also keep us optimistic and also makes the surrounding positive.

Vishwa Yoga Day was celebrated by the students of St. Soldier Group of Institutions by telling about the importance of yoga in mental peace, healthy body, in which students while doing yoga at home inspired others to do yoga as well. Students performed different types of yoga. Apart from this, yoga asanas were said to be the best method to stabilise the body, control one’s thoughts and fill positive energy in the body.

Keeping the 2021’s theme “Yoga for Well Being” on mind, CT Group of Institutions, South Campus, Shahpur, held a one-hour offline yoga session in which the guest trainer Rajan Syal from Parindey academy motivated the staff members to opt for yoga. The event was graced by CT Group co-chairperson Parminder Kaur Channi, vice-chairman Harpreet Singh, and Campus Director Dr Rahul Malhotra along with a few staff members. CT Public School and CT World School held online yoga sessions in which guest trainer Mayur Ahmed, International Yoga Trainer and Haryana Governor Awardee, gave a few simple tips of yoga to remain healthy in order to strengthen the immune system in the period of Covid. Channi said: “This day is important in two ways, one is that we can dedicate this day to yoga and other is solidifying the immune system in this tough period.”

Ivy World School under the aegis of the Vasal Education Society celebrated International Yoga Day. To convey the message of keeping mind and body fit through asanas. Students from various classes shared their videos and photos. On this occasion, Principal S Chauhan shared the importance and need of practising yoga to stay fit and healthy. President of Vasal Education Society KKVasal, Chairman Sanjeev Kumar Vasal, Director Ena Vasal and CEO Raghav Vasal appreciated the efforts of the students and added that the celebration of International Yoga Day was a reminder to incorporate yoga in everyday routine to enjoy a happy life.

The day was celebrated by the Pyramid College of Business and Technology (PCBT) with great enthusiasm. Dr Sanjay Bahl, Director, PCBT, demonstrated various asanas followed by Omkar chanting. Warm up exercises were taken and performed sitting and standing asanas, importance of these were explained simultaneously. The yoga practice concluded with synchronised recitation and regular practice of yoga was encouraged as yoga reflects the union of individual consciousness. A virtual session with yog acharya on G-Meet was also held at 1130 am to bring peace, harmony, happiness and success to everyone. The session was taken by HKL Sharma, retired principal and yoga practitioner for more than 20 years. He emphasised on the importance of yoga and physical exercise for in daily lives as yoga is a mental, physical and spiritual practice that needs to be carried every day.

Vajra Corps Celebrated 7th International Day of Yoga on the theme ‘Yoga at Home – Yoga with Family”. Common yoga protocols including asana, pranayama and dhyana sessions were organised for all ranks and their families by Vajra Corps formations in Jalandhar, Amritsar, Ferozepur, Ludhiana and Beas Military Stations to improve physical, mental, emotional and spiritual health. All ranks and families of Vajra Corps joined the Yoga Day programme and practiced Yoga from their homes, making use of various digital platforms. At the end of the session, a pledge was taken by all participants to observe self-discipline and to abide by all advisories and protocols on Covid issued by the government. They also pledged to use yoga techniques to enhance their immunity to fight the coronavirus.

On 7th International Yoga Day, BJP Sports Cell Punjab organised a yoga camp under the chairmanship of State Convenor Dr. Raman Ghai. On this occasion, yoga was performed under the instructions of Yoga expert Dr Surabhi Sood. Vice-Chairman of Indian Red Cross Society and former MP Avinash Rai Khanna was specially present. Khanna, while addressing the people at the conclusion of the Yoga camp performing yoga daily keeps the mind calm and the body healthy.

International Yoga Day was organised by the District Yoga Association, Hoshiarpur, in which participants appeared online according to the national protocol. The centre of this yoga programme was Yoga Ashram located in Narayan Nagar. Under the supervision and guidance of yoga gurus Surendra Kumar, Swami Gyananand, Anita Jaswal, the participants did yoga by staying in their homes by joining online links.

Yoga day was celebrated at STC BSF Kharkan camp in which all the officers, subordinate officers, jawans, recruits, especially female recruits and family members of staff of Subsidiary Training Centre Kharkan participated. Online yoga programme was also organised. Musical yoga was presented by a team of recruits and instructors. Essay and quiz competition awareness on yoga was organised and Sanjeev Bhanot, IG STC, BSF Kharkan rewarded the winners of essay and quiz competition. He motivated the BSF personnel and recruits to adopt yoga as a regular practice for physical fitness and mental peace. — OC

#HealthBytes: The many health benefits of dry fruits and nuts - NewsBytes

#HealthBytes: The many health benefits of dry fruits and nuts - NewsBytes