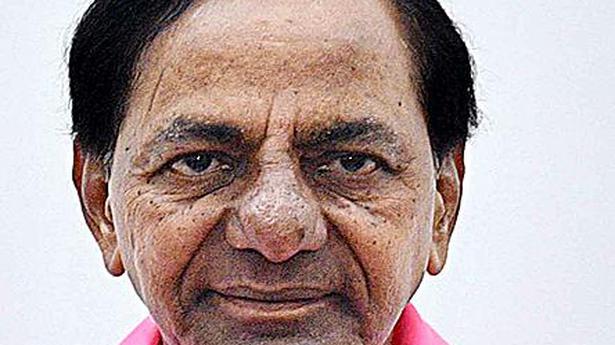 Chief Minister K. Chandrasekhar Rao has directed the Health Department officials to take steps to set up oxygen generating plants with a capacity of 324 metric tonne in 48 hospitals in the government sector across the State to avoid scope for shortage of oxygen in future.

Steps should be initiated to set up a plant with a capacity of 100 MT liquid oxygen in the GHMC limits. The Chief Minister wanted the officials concerned to ensure that six units of 16 MT capacity, 15 units of 8 MT capacity and 27 units of 4 MT capacity are set up in Hyderabad as well as district and area hospitals.

He requested the firms engaged in oxygen generation to ensure supply of 11 oxygen tankers each with a capacity of 20 MT in the next 10 days. This is aimed at ensuring that there was no shortage of oxygen in the State in the coming days. The Chief Minister gave the directions during a high-level meeting convened to discuss the status of Coronavirus (COVID-19) pandemic in the State with officials of Health and related departments on Monday.

Mr. Rao stressed the need for the patients, especially lower middle class and poor, to opt for State-owned hospitals for COVID-19 treatment as the government is providing free treatment along with medicines, food and other facilities. In all, 6,926 beds – 2,253 oxygen beds, 533 ICU, 4,140 general beds – are available in the government hospitals as on Monday, officials explained the Chief Minister.

Responding to this, the Chief Minister wanted people to opt for government hospitals in view of the availability of beds, oxygen, Remdesivir and other drugs for treatment of COVID-19 patients rather than the private hospitals where they could be forced to shell out money. Mr. Rao directed the Health officials to ensure equipment and medicines in Gandhi Hospital and ENT Hospital in Koti, the two hospitals designated to treat Black Fungus. The officials should take steps to ensure that equipment like micro debriders and HD endoscopic cameras are procured at the earliest, he said.

In addition, officials should be in constant touch with the Central government to ensure that quota of vaccines allocated to the State is received on timely basis. Officials informed the Chief Minister that the State had so far received 57.30 lakh doses of vaccine and currently stocks of 1.86 lakh doses of Covaxin – 58,230 – and Covishield – 1.28 lakh – are available in the State.

The Chief Minister reiterated that the government is prepared to spend any amount of money for setting up necessary medical infrastructure and it was decided to set up new medical colleges at Sangareddy, Jagtial, Kothagudem, Wanaparthy, Mancherial and Mahbubabad districts.

Steps should be taken to start nursing colleges along with these medical colleges, he said.