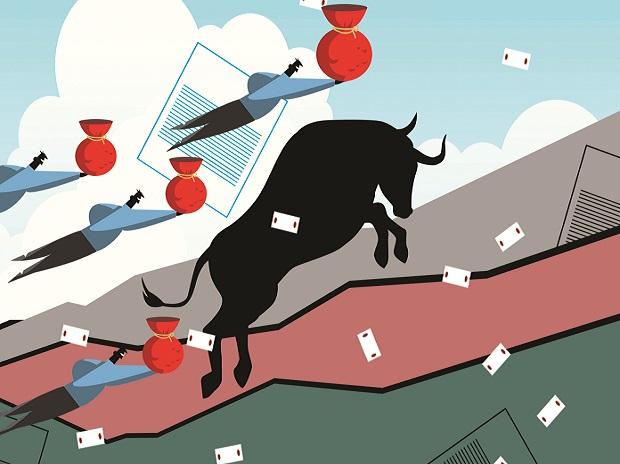 Stock market updates: A healthy buying in heavyweights such as Reliance Industries, ICICI Bank, Bharti Airtel, HDFC Bank, ITC, Axis Bank, TCS, and Maruti Suzuki lifted benchmark indices nearly a per cent higher on Monday with the broader Nifty50 index hitting a fresh record high.
RIL, up over 3 per cent on the National Stock Exchange (NSE), single-handed lifted the frontline Nifty50 index to record peak of 15,606 in the intra-day session today while other index contributors rallied between 0.5 per cent and 3 per cent.

By close, the Nifty index quoted at 15,583 levels, up 147 points or 0.95 per cent. About 39 of the 50 constituents on the index settled the day in the green while 11 constitunts settled in the red including M&M (down 4.4 per cent), Adani Ports, L&T, Sun Pharma, and Indian Oil Corporation.

Of these, shares of Mahindra & Mahindra (M&M) slipped 7 per cent to Rs 790 on the BSE in intra-day trade on Monday after the management said the tractor industry is expected to grow in low single-digits during the financial year 2021-22 (FY22), with the company focused on gaining market share. Since May 4, the stock of M&M has outperformed the market by surging 14 per cent, as compared to a 6.6 per cent rise in the S&P BSE Sensex till Friday. READ MORE

Add to it, the lowest daily case count of Covid-19 infections in 48 days further improved sentiment in the broder market. The country reported 152,734 fresh Covid-19 cases in the last 24 hours, the lowest daily count since April 13, 2021. According to global rating agency Fitch Solutions, the impact of the second Covid-19 wave on rated Indian firms is expected to be manageable, as most companies’ credit profiles are supported by their strong market positions, adequate balance sheets, liquidity and diversified operations.

They have the flexibility to adjust costs and key business drivers, until operations recover with the easing of restrictions, it said. READ MORE

Consequently, the mood in the broader market remained upbeat. The S&P BSE MidCap and SmallCap indices added 0.45 per cent and 0.5 per cent, respectively amid buying in construction material, telecom, energy, and metal stocks.

The BSE Energy index advanced 2.5 per cent, followed by the BSE Telecom and Metal indices (up 1.5 per cent each), and the BSE Oil and Gas index (up 1.3 per cent).

Individually, shares of Indian Hotels Company hit a fresh 52-week high of Rs 140.50 on the BSE in intra-day trade on Monday on expectation of demand recovery as the Covid-19 situation gradually comes under control. In the past one month, the stock of the Tata Group Company has rallied 26 per cent as compared to a 6 per cent gain in the S&P BSE Sensex. It surpassed its previous high of Rs 139, touched on December 7, 2020. Meanwhile, the stock had hit an all-time high of Rs 164 on June 26, 2019.

Furthermore, shares of Prozone Intu Properties were locked in the 10 per cent upper circuit band for the second straight day, at Rs 31.75 apiece, on the BSE on Monday with only buyers rushing to the counter. In the past three days, the stock has zoomed 56 per cent from a level of Rs 20.40 seen on Wednesday, May 26 and was trading at its highest level since May 2019.

Lastly, shares of PNB Housing Finance were locked in the upper circuit of 20 per cent at Rs 525.20, also its 52-week high on the BSE on Monday, after the company board approved a capital raise of up to Rs 4,000 crore, led by entities affiliated to the Carlyle Group Inc.

European stocks slipped from record highs on Monday in subdued trading due to holidays in major markets. The pan-European STOXX 600 index was down 0.1 per cent in morning trade, with shares in Frankfurt falling 0.3 per cent and Paris dipping 0.1 per cent.
The UK and US markets are closed for a holiday, keeping trading volumes muted across the board.

In the commodities market, Brent Crude was last up 1 per cent at $69.4 per barrel-mark.

(With inputs from Reuters)

Unaudited financial report for the first quarter of 2021 - GlobeNewswire

Unaudited financial report for the first quarter of 2021 - GlobeNewswire