Journalist and actor TNR passed away today morning after battling COVID-19. He was fondly known as Thummala Narsimha Reddy. He was 45.

The actor was taking treatment at a private hospital in Hyderabad. His unexpected death has made the entire Tollywood industry mourn in grief.

TNR had recently appeared in films like Jathi Ratnalu, Uma Maheswara Ugra Roopasya and Falaknuma Das. When all were expecting for him to recover, this sudden news left one and all shocked. 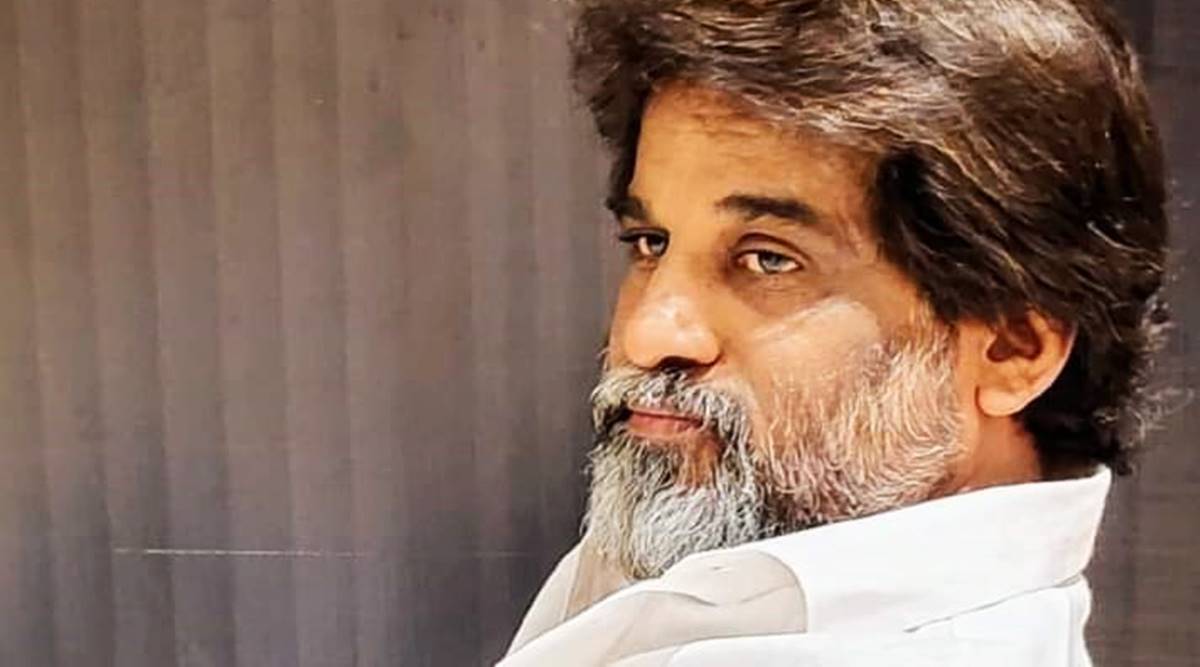 Many popular actors and directors from Tollywood have shared their condolences for the Journalist-turned-actor.

Actor Nani took to Twitter to share his condolences for TNR. He wrote, “Shocked to hear that TNR gaaru passed away .. have seen few of his interviews and he was the best when it came to his research and ability to get his guests to speak their heart out. Condolences and strength to the family.” 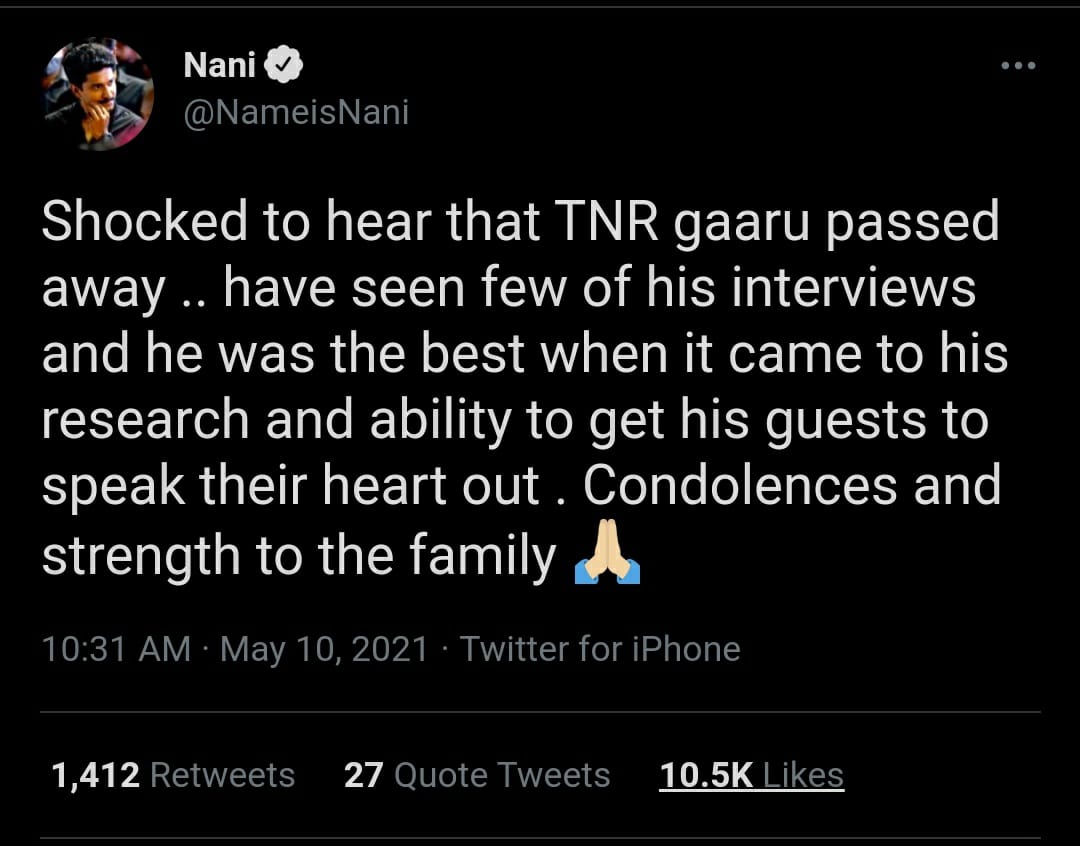 “Very sad to learn of journalist #TNR garu’s demise..  My condolences to his family and loved ones. May he rest in peace,” read Actor Aadhi’s tweet. 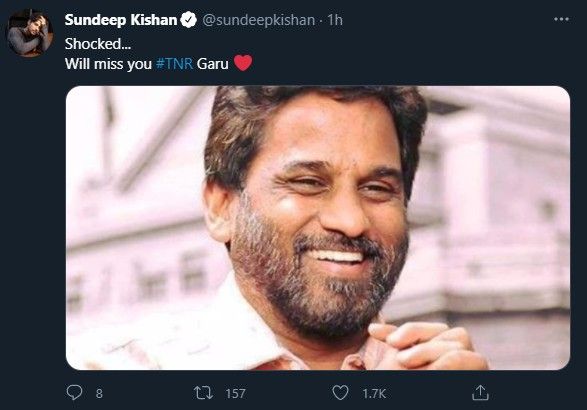 Actor and producer Vishnu Manchu wrote, “Saddened by the loss of #TNR. Good human being. Probably one of the best interviews I did ever was with him a year ago. Condolences to his loved ones. This is like a nightmare.”

Director Maruthi tweeted, “Unbelievable and shocking. It’s very hard to digest and painful to know my friend TNR is no more. My deepest condolences to their family. #corona show some mercy. We can’t take this any more.” 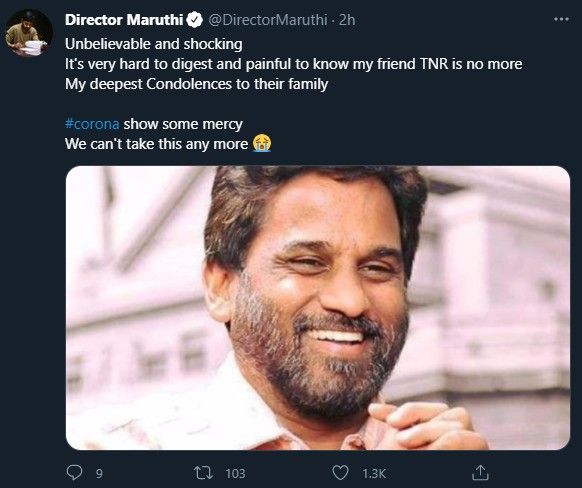 Gopichand Malineni’s Twitter post read, “Shocked to hear that TNR gaaru passed away ..Condolences to his family. May your soul rest in peace sir.”

Sudheer Babu took to Twitter to express himself. He wrote, “This comes as a shocker …. lost a fine journalist .. may peace be with him !!” 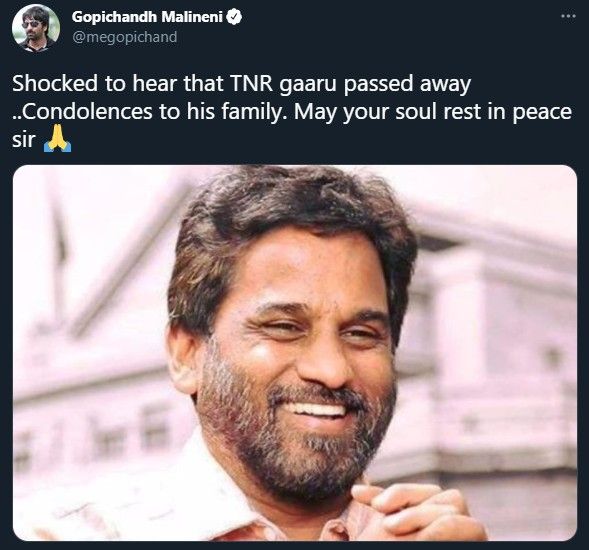 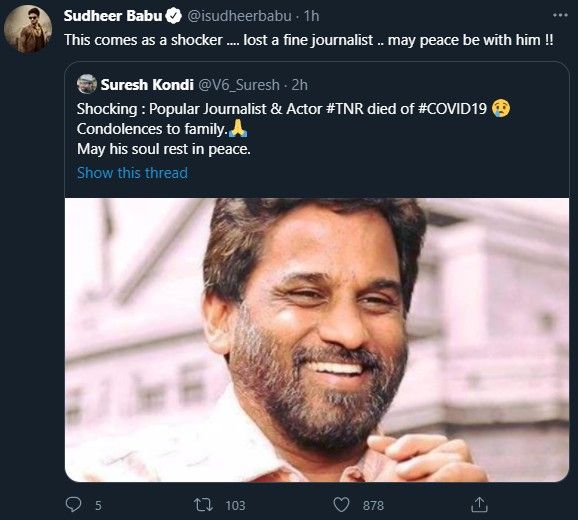 “It’s really Disturbing to hear that TNR’s sudden demise..He is such a soft spoken gentleman… We miss you sir.. #RIP My deepest Condolences and strength to the family,” read Anil Ravipudi’s tweet.

TNR was a professional journalist who had hosted a show titled, Frankly Speaking with TNR for the YouTube channel iDreams, in which he interviewed celebrities.

Reportedly, he was all set to perform a key role in Anil Ravipudi’s upcoming film F3: Fun and Frustration but the shoot was kept on hold due to the COVID-19 second wave.