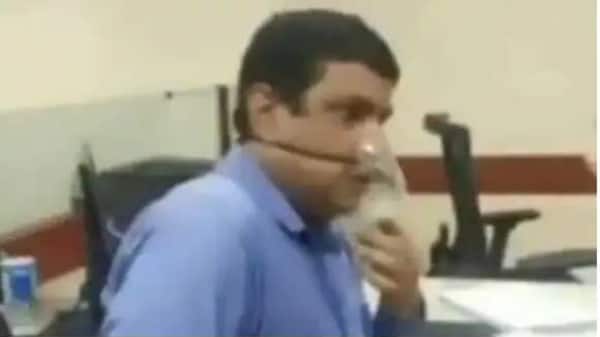 An employee of Punjab National Bank (PNB) showed up at the bank in Bokaro district of Jharkhand with oxygen support, claiming he was denied leave by seniors, according to a reports in Livehindustan. He was accompanied by his family for oxygen cylinders.

The incident took place at Sector 4 branch of Punjab National Bank, Bokaro, where where Kumar works as a manager.

The video of Arvind Kumar reaching office with oxygen cylinder is going viral on social media. Kumar was seen reaching his branch office leaning on his wife and his son dragging the oxygen cylinder, according to Livehindustan.

Kumar’s family members alleged that despite the fact that he has recovered from COVID-19 and his lungs are still infected due to which he is on oxygen support at home.

The PNB, however, denied Kumar’s allegations and said he staged a drama to defame the bank

“The doctors have said that it will take three months for me to be fully recovered because the infection has spread to my lungs. Why am I being harassed?” Livehindustan reported Kumar as saying.

After the verbal spat, Kumar was sent home.

The bank, meanwhile, said that this was a pressure tactic adopted by Kumar to drop charges against him and stop recovery proceedings of his NPA loan accounts.