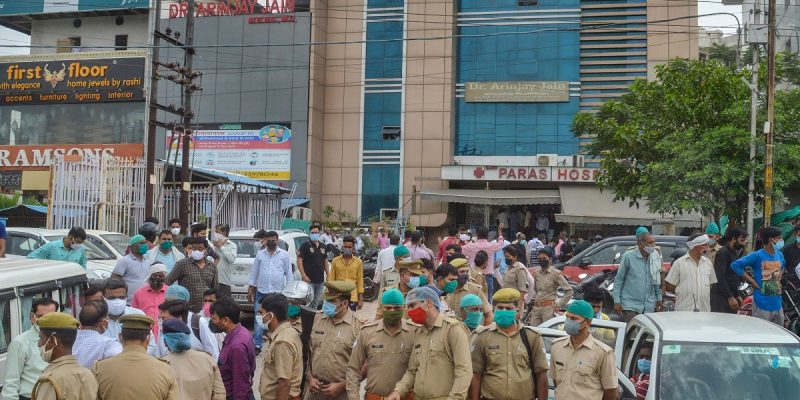 New Delhi: The Agra district administration has sealed the Shri Paras Hospital, whose owner was heard in a clip saying that the private hospital had cut off oxygen to nearly 100 patients in the ICU as part of a ‘mock drill’ on April 26.

Arinjay Jain, the owner, could be heard in a clip saying that 22 patients ‘turned blue’ during the exercise. He says the hospital was informed that suppliers may not be able to provide medical oxygen, which prompted the ‘drill’ to see which patients needed a high flow of oxygen.

Agra district magistrate Prabhu Narain Singh confirmed to the Indian Express that the person who could be heard in the video clip was Arinjay Jain. The ‘mock drill’ was conducted on the morning of April 26 and the video was made on April 28.

Jain told the Indian Express that the hospital had adjusted the bed flow of oxygen of patients to ‘check what amount’ was required. “Since everyone had been saying that oxygen must be used judiciously we decided to adjust levels to see if we could use less. We identified 22 patients who required high flow oxygen. We had sleepless nights over oxygen supply and this was our experiment to stabilise supply. We did not cut off oxygen as is being said everywhere. There is no irreversible impact of lowering oxygen supply,” Jain said.

The magistrate Singh also denied some reports, which said that 22 patients died during the so-called ‘drill’. “The 22 patients being talked about are primarily those who were critical. However, we will study the video and take action accordingly,” he said.

He also said though there was ‘some oxygen scarcity’ on the morning of April 27 and 28, the administration was able to get around 900 cylinders from a plant in Sikandrabad. The administration sent cylinders to hospitals which were running low on oxygen, he said. “In the case of Paras Hospital, we first sent five cylinders. When they faced more requirement, and their usual vendor could not deliver, we sent them cylinders through one of our suppliers,” Singh said.

According to the Indian Express, the district administration has ordered a probe by the additional district magistrate (city) and the chief medical officer. A notice pasted outside the hospital on Tuesday evening said it would be sealed from June 8.

The newspaper said the shifting of 55 patients will be overseen by the chief medical officer. “But the hospital will be sealed anyhow. Our investigation is not yet complete and we are still verifying facts. Anyone with a complaint can approach the ADM and each aspect will be analysed,” said Singh.

Ashok Chawla, a resident of Agra, spoke to the Indian Express, saying his father may have died during the so-called ‘mock drill’. Chawla’s father was admitted to the Paras Hospital on April 14 and was put on ventilator support. “Dr Arinjay Jain called me on April 26 afternoon and told me that he would not be able to save my father. He said the hospital lacked oxygen and he would not be able to sustain the supply. Within half-an-hour, I arranged a jumbo oxygen cylinder and so did the administration. But within two hours, he told me that my father would not survive… Now, it is clear that he died due to that experiment… The truth is he had died that morning itself,” he alleged.

He said he was glad the clip has emerged. “It has confirmed our suspicions. This hospital has been functioning with impunity,” Chawla said.